How to use memes in your social media strategy

How to use memes in your social media strategy

Memes have made a real breakthrough in the social space of late. Audiences love the capacity to illustrate irony and sarcasm through the use of a combination of text and images. This entertaining and humorous content can also be a valuable asset to your branding efforts. Let’s take a look at how you can implement memes across your online marketing portfolio. What is a meme?

First of all, if you’ve had your head in the sand for the past few years, you may be wondering what a meme exactly is. In fact, even if you’ve seen memes before, you might not fully understand them. So, let’s tease it out.

Memes may seem tragically millennial; however, the word “meme” is actually rooted in academic history. Richard Dawkins, an evolutionary biologist, coined the term in the 1976 bestseller, The Selfish Gene. He defined this term as a trend or movement in popular culture that is popularised to the point that it becomes a genetic trait of society.

This definition has spiralled into something much more specific. We see memes online every day. They are infectious ideas. They could take the shape of an image, link, video, hashtag or paragraph of text with obvious (and often ironic) spelling grammar, contextual, political or ethical discrepancies. Thanks to social media and the capacity to instantly share online content, these memes have become instantly recognisable across the globe.

Now, when someone says “meme,” it’s likely those in the know will think of the Grumpy Cat, Be Like Bill, Doge, Bad Luck Brian, Ermahgerd and the Success Kid. Often media content is distilled down to a simple catchphrase paired with an image (called an image macro) that makes for ironic, awkward or just plain ridiculous reading. These are what is known most widely today as memes. 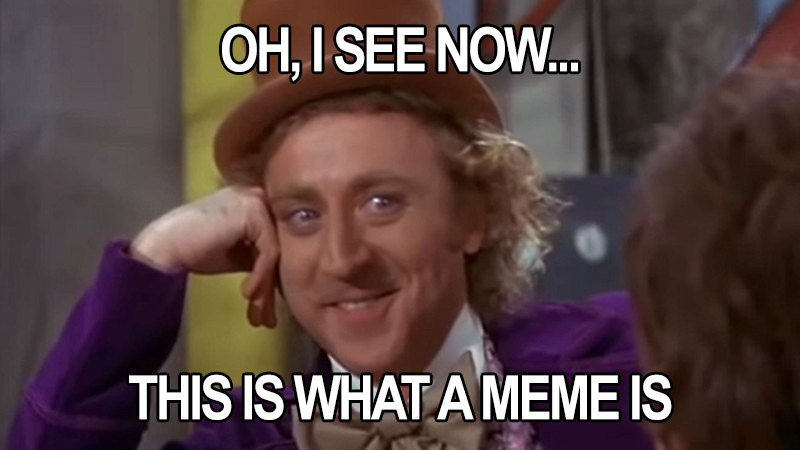 Are there different types of memes?

Yes! There are many different types of memes from the one-hit-wonder to the everlasting catchphrase. When you think about it, if a “meme” is just something that is wildly popular on the internet, it can really be anything. For a taste of the diversity available within the meme catalogue, here are a few of the identifiable meme types circulating our communities.

They were here at the beginning of the so-called fad and they will last the duration of its reign. These are the memes that are widely known and loved – catchphrases that have surpassed their original online format and are now quotable in every day conversations. They are timeless. These memes are so ingrained in our society that those in the know will understand even without the accompanying context. This category includes memes such as “y u do dis,” “ermahgerd,” “shut up and take my money,” “sorry, not sorry” and “this is fine.” These are the types of memes that are visually distinguishable by their two lines of white text at the top and bottom of an image. They are often satirical, mocking and tongue-in-cheek. Sean Bean (Boromir, Lord of the Rings), Gene Wilder (Willy Wonka, Willy Wonka and the Chocolate Factory) and Liam Neeson (Brian Mills, Taken) have wound up as regulars in meme culture and can often be found accompanied by pithy text.

You probably saw the black and blue dress. Or maybe it was white and gold to you… Regardless, that is a prime example of a mind-blowing meme – something you see and just go, ‘what?’ The Dress meme did exactly that and people still refer to it today. Everyone who thought it was gold, was like, “How can people think it’s black?” and anyone who saw black had no idea how someone could see gold.

‘If you love memes, why wouldn’t you want multiple,’ thought the creator of the meme series. A meme series is…well, a series of memes. Found either in an album on social media or in succession in a blog post, this collection of memes generally has a common theme and each meme acts as a topper to the one preceding. What are memes used for in marketing?

So, why are we dedicating a whole blog to memes? As popular social signals, memes can be a strong asset to your content marketing strategy. On average, Australians spend 100 minutes on social media every day. Just as our lives are defined by the relationships we have and the stories we share in real life, they are also influenced by the jokes, commentary and references made online. “Memes are native to the language of social media,” says Forbes, and to instil a brand message on social media, you should be using idioms the consumer has come to expect. Memes are a great way to break the consumer/brand barrier and speak to your customers just as their friends would. Tailoring the brand experience to social media gives brands a louder voice to cut through the standard branded advertising that consumers have become accustomed to tune out. 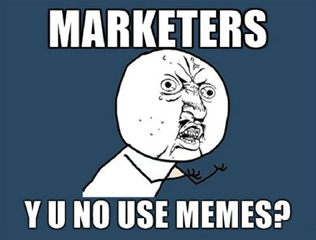 Let’s take a look at how to use these millennial magnets to boost your business online. Each business will achieve different results with different types of memes, depending on the audience you are targeting, but there are some hard and fast guidelines to follow as you start to ‘test and tag’ so to speak.

If you’re using memes for the correct audience, they are fluent in social media. As such, you need your meme to be authentic – don’t try too hard. Your meme flat out won’t work if it’s created by someone who doesn’t understand and interact with this type of content on the daily.

Boring memes are BAD! The whole point is to be silly and have fun. If your brand is trying to be serious, memes are not for you. You need to allow the business to be vulnerable and show its human side.

Not everyone will understand your meme and that’s ok. The worst thing you can do is try to appeal to everyone in your audience. This doesn’t mean you should post something that may offend a portion of your target market, but you can’t expect to capture everyone with a single meme.

Make your meme easy to share by adding a caption that inspires interaction, like a question, and make sure you increase your reach by using hashtags and listing the location of your post.

Social media trends change on a dime and are influenced by the big events and current affairs within our society. Memes are a great way to comment on sports, celebrity gossip, viral content and even politics, if you’re brave. Stay on top of what’s going on in the world and, like Oreo in the Super Bowl blackout, take advantage of situations as they arise.