Snapchat Marketing – Building Your Brand in 10 Seconds or Less

So, you’ve got your foot in the door of social media. People like your Facebook page, you’ve got followers on Instagram and your YouTube channel is getting a ton of subscribers—great work! Whilst this may already seem like a bit of a handful to manage, another social platform is creeping into the world of marketing in a major way, and you need to start paying attention now.

Meet Snapchat, the image/video sharing app for people with an attention span shorter than a toddler drinking espresso. In 2011, Evan Spiegel devised a photo sharing app where the user could share non-permanent photos, or snaps, that would self-destruct after 5 seconds. His co-founder, Bobby Murphy, was brought on board to code the app and the rest, they say, is history.

Snapchat hit the market in 2012, and within a year Facebook offered a staggering $3 billion to acquire the company—a deal that, to everyone’s surprise, was turned down by Snapchat (remember that Facebook bought Instagram for $1 billion in 2012). In 2015, there are 100 million users of Snapchat who, on average, share an astonishing 8,700 snaps per second (or around 750 million snaps per day)!

Okay, enough with the dizzying numbers. What exactly is Snapchat and how does it differ to other image sharing platforms, such as Instagram? The key point of difference is the images or videos you send vanish into oblivion after you send them to your friends. “You mean, you put all that effort into taking a photo and uploading it only for people to see it once before disappearing forever?” Seems like a bit of a waste of time, huh? Well, that’s the point; Snapchat is just meant to be a bit of fun.

Where people might spend a perplexing 10 minutes choosing the perfect hashtag to post alongside their #cleanliving organic quinoa and kale salad, Snapchat users will spend just a few seconds to film a candid moment to send to their friends. They might even scribble a crude picture using the inbuilt drawing tools, just for a laugh. Instagram is a polished time capsule of your life and Snapchat is a carefree expression with little to no thought of the aftermath. Whilst Instagram combs its hair in front of the mirror, Snapchat is out in the garden doing cartwheels.

It’s not surprising to find that the majority of users are aged between 13 and 24, nor is it surprising to hear that many of the biggest celebrities and online influencers are active users of Snapchat.

So, how can brands and businesses get involved in this growing culture? How brands are using Snapchat

Amazon, CNN, McDonald’s, General Electric and Heineken are just some of the brands that have launched successful Snapchat campaigns. Many brands use it as a platform for quick updates or to give sneak peeks at new products. The key is exclusive, engaging content. Heineken used Snapchat to give users an early confirmation of which artists were performing at Coachella music festival. Other companies run campaigns offering users promotional codes to be used online or in store. 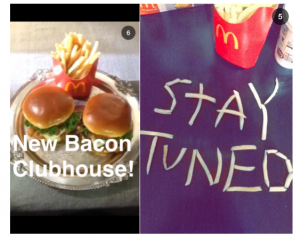 The disappearance of content may seem like a downside, but if used correctly it can create repeat engagement from your audience.

What’s next for Snapchat?

A survey released this week of 9,400 US teens aged between 13 and 19 reported that 19% were active Snapchat users, and only 15% used Facebook. This is a very interesting statistic as we see the next generation of innovators moving away from the current social media king.

In a very ambitious move last year, Snapchat launched an in-app feature called “Snapcash”, allowing users to easily transfer money to one another through the app. This handy feature is great for sorting out who-owes-what after dining at a restaurant, or splitting a taxi between friends.

Snapchat ads have been available for big brands with big budgets for a little under a year. The ads are curated to ensure that users are delivered content in line with the culture. Whilst the current advertising platform is not available for all businesses, it is highly likely that in time we will see the doors open for businesses big and small.

There you have it, a crash course in a rapidly developing social media platform. With 60% of 13–34 year olds in the US using Snapchat, it will quickly become a standard piece of your brand’s social media portfolio. Get the app, develop your voice and share fun snippets of your day-to-day operation. Just post and relax, the content will self-destruct in 10 seconds or less anyhow.