These days, businesses of all kinds are on social media. It’s where they go to talk directly to their customers and to have a little fun with their marketing and branding. When done well, it can result in high engagement rates and brand loyalty. But one false step, and things can go pear-shaped pretty quickly. And, as the below examples will show you, it’s easier to remember campaigns that went sour than those that hit the right note.

Social media can be a brutal place. Here are some social media fails that have left a foul taste in many of their customers’ mouths.

In what can only be described as a seriously weird decision, last Friday KFC posted the below photo, which wasn’t met with much appreciation or delight by the Twittersphere. It attracted more than 1300 shares in less than an hour, and a heap of comments that derided KFC’s somewhat questionable photo and caption. Others pondered whether the whole post had merely been a desperate attempt to attract publicity. Which it did, but perhaps not for all the right reasons. 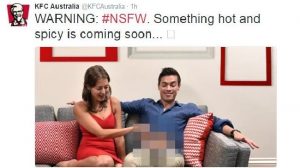 Either way, the post was deleted after an hour, and KFC released a statement saying it wasn’t intended to be offensive.

While the post might be gone from their feed, it’s far from forgotten. Wonder if their social media manager still has a job…?

Timing and context is everything in social media, and that’s the lesson that Aldi’s social media team is going to have to learn pretty quickly.

At a time when the supermarket is being hounded on social media by Animals Australia (and their customers) to stop selling caged eggs, Aldi posted this to their Facebook page:

Aldi’s recent post left a bad taste in many of their customers’ mouths.

While it might seem like a fairly safe question, Aldi was just setting themselves up for failure, given that their fans have been pretty vocal about their decision to continue selling caged eggs.

Soon after the post went up, fans began furiously voicing their displeasure with the supermarket.

One Facebook user wrote: “ What did the chicken say to Aldi? Please let me out of the cage, forever and always”.

Another hit back with, “It’s a sad day – Aldi chooses to make animal jokes when so many of its customers are asking it to take animal welfare seriously”.

Aldi has since deleted their post, but it hasn’t stopped angry customers from hijacking other posts with calls to sell free range eggs.

Key takeaway: Take your customers’ concerns seriously, and listen to what they have to say. Also, animal welfare is no laughing matter.

The supermarket giant was accused of exploiting Anzac Day and Gallipoli for financial and commercial gain after they splashed their company logo and phrase “Fresh in our Memories” over photos of former soldiers.

On their website, they also invited users to create a custom profile picture and upload their own images of people affected by the war. The generator then placed the words “Lest we forget, Anzac 1915-2015”, as well as the “Fresh in our Memories” phrase and the Woolworths logo.

The campaign was soon hijacked, with Twitter users creating their own “fresh in our memories” memes to display their anger at Woolie’s insensitive move (this one here from ABC is perhaps one of our faves). While these fails are less than forgettable, you shouldn’t let them turn you off from managing your own business’s social media accounts. If done responsibly, together with market research and careful planning, your social media activities could prove to be one of your most effective forms of marketing.